At least three people have tried urssus (including me ;-) and over 80 have downloaded it. The two that told me anything say it's a nice app.

I hope it keeps improving.

Right now, it has about a dozen less bugs (or more features) thanks to the issue reports by vgarvardt! 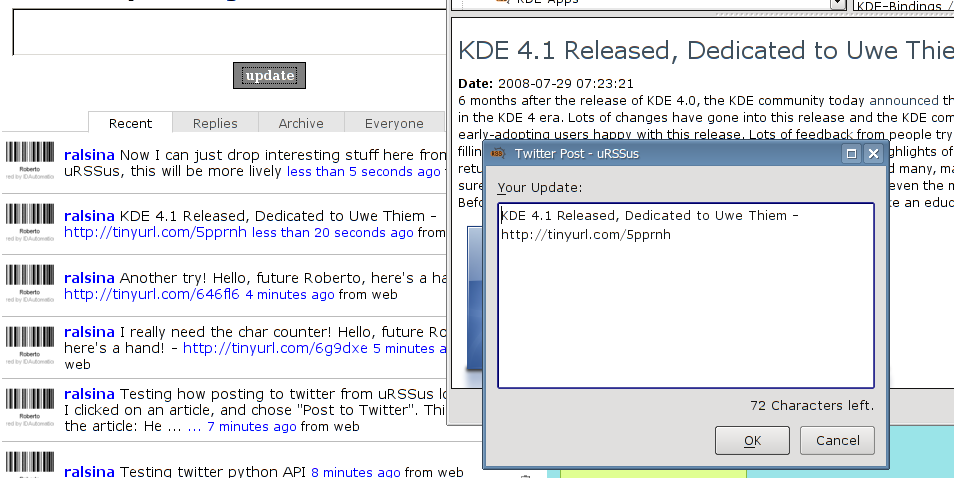 Here you can see the window, which is filled automatically with the post title and URL (made tiny, 140 chars is not much!), with the classic char countdown.

So, I needed a python script to create tinyurls. Google gets me here where credit is given to this guy. Of course that guy's solution is a bit broken, check the comments ;-)

I may have gotten a bit carried away with mootools: Combined view now has an accordion-like thing google-reader style. 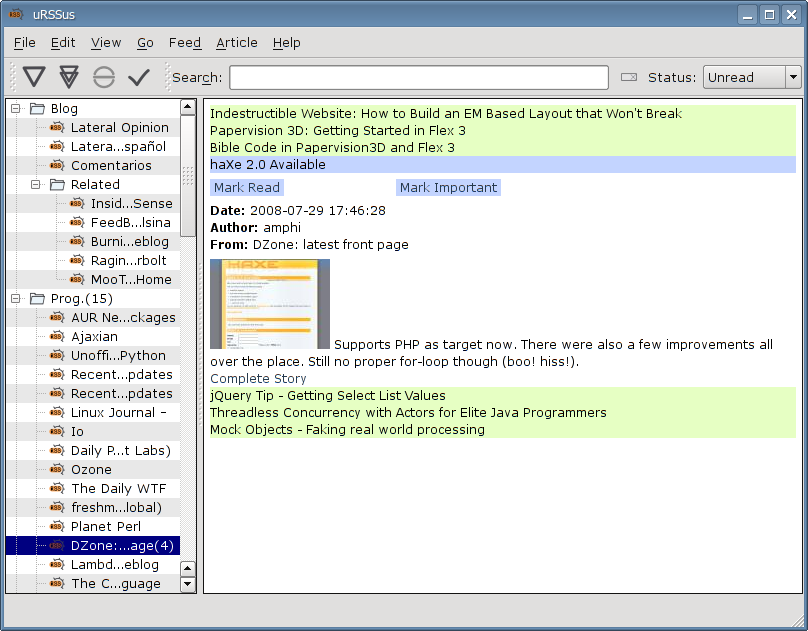 Not too pretty, but pretty's not my thing.

Urssus: July 29th - An original feature, at last (with screenshot)

Tired of chasing after other program's features, I took a detour on the original feature road: the combined view is now much nicer than Akregator's.

Why? Because you can use it and still flag individual articles as read/unread/important.

Using a tiny bit of mootools and some rudimentary javascript, plus a wee Tenjin template effort... 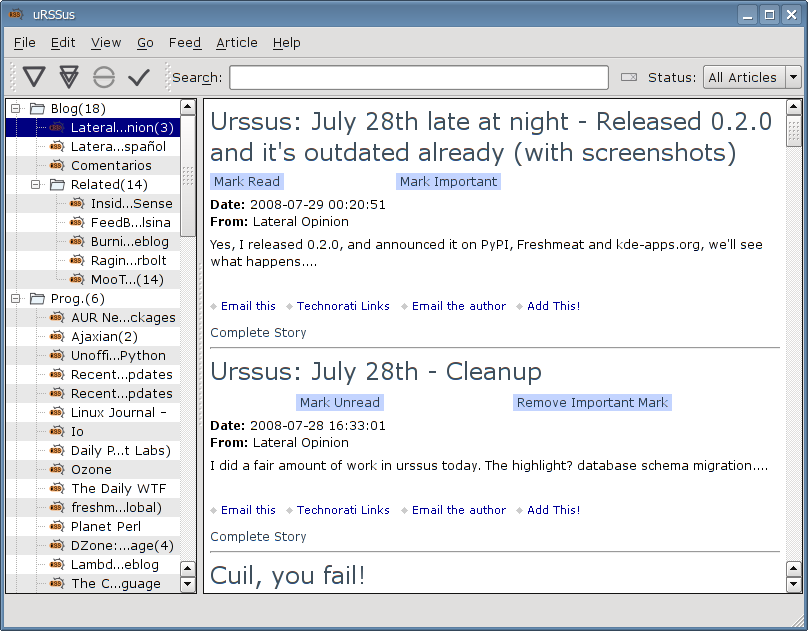 And yes, the "buttons" appear and disappear as needed, and update the GUI just like they should.

Urssus: July 28th late at night - Released 0.2.0 and it's outdated already (with screenshots)

Yes, I released 0.2.0, and announced it on PyPI, Freshmeat and kde-apps.org, we'll see what happens.

But why is it outdated? Because I am doing nicer UI work, already. 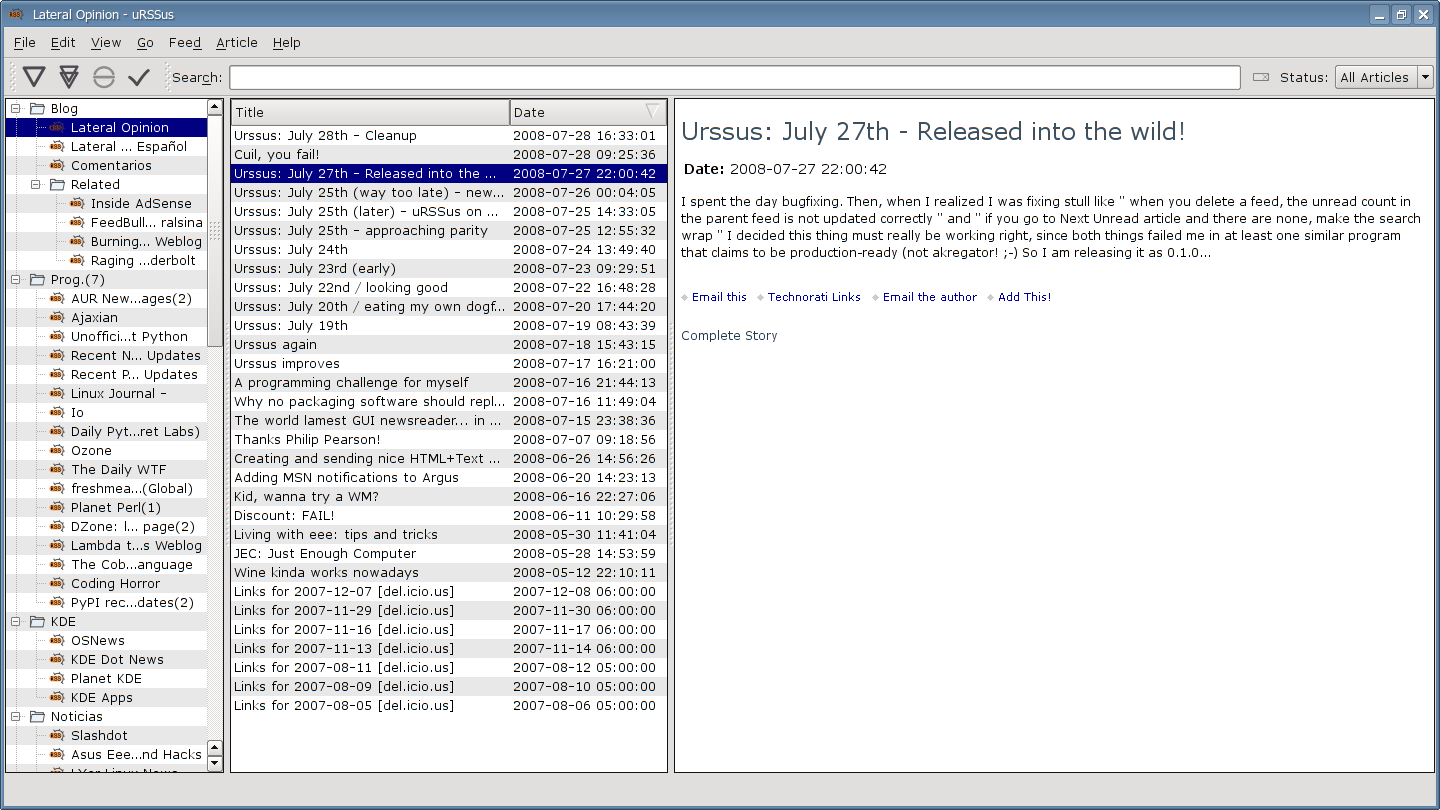 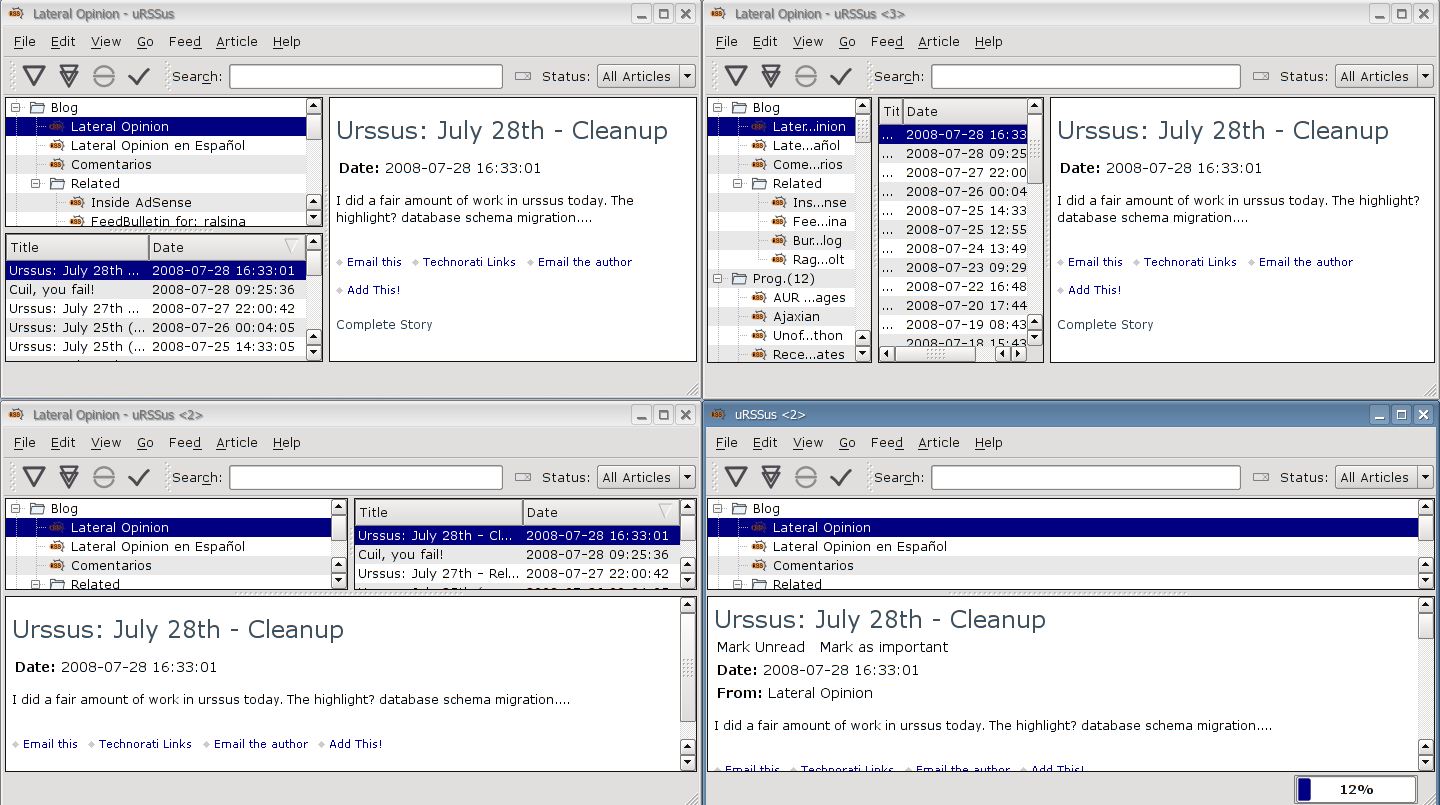 I did a fair amount of work in urssus today. The highlight? database schema migration.

And the big one:

What does that mean? That I can change the database and the user will not notice anything.

On startup, uRSSus checks if you are using the correct schema, and updates your database accordingly.

For example, I can now implement manual feed sorting just adding a "position" column to the Feed class. If I had not implemented this, that would require a much greater hack.

Now? I just do it, write an upgrade/downgrade script, and that's all. Migrate is really a very cool tool, and shows the strength of using SQLAlchemy (not so much that of using Elixir, because they get along grudgingly ;-)

I spent the day bugfixing. Then, when I realized I was fixing stull like "when you delete a feed, the unread count in the parent feed is not updated correctly" and "if you go to Next Unread article and there are none, make the search wrap" I decided this thing must really be working right, since both things failed me in at least one similar program that claims to be production-ready (not akregator! ;-) So I am releasing it as 0.1.0

And I am doing it for real:

It has been a nice experiment, and I will try to write something coherent tomorrow about lessons learned and such as we reach my self-imposed two week deadline for Akregator feature parity.

Last post for the day, and probably until monday.

And of course, a screenshot. Akregator on the left, uRSSus on the right: 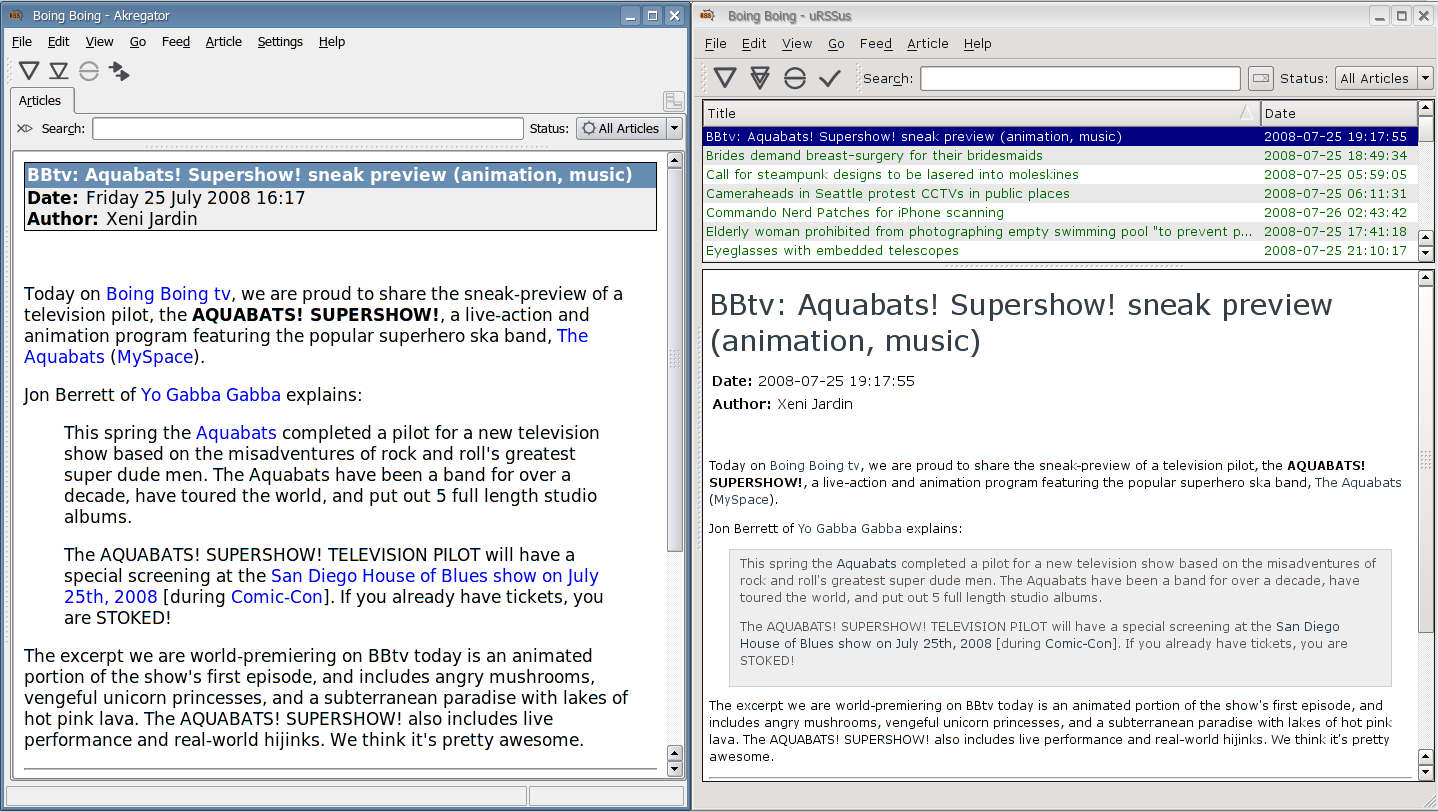 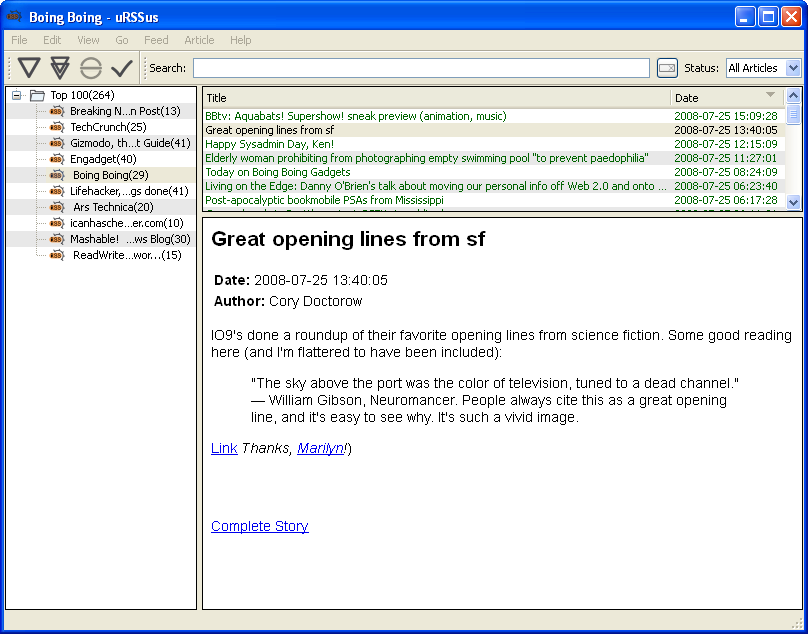 So you need to install SQLAlchemy 0.4.6 and Elixir 0.5.2 and python and pyqt and paver, and whatever manually right now... it does work.

I had to change about 10 lines, specifically stuff about temporary files.

On Linux, I create a NamedTemporaryFile, write to it, then read it from another place of the code. As long as I keep a handle to the object that's ok.

On Windows, it seems I can't read the file because it's locked by the writer, but if I close it it's deleted, so I switchedto mkstemp and that's it.

Also, it doesn't run well from inside IDLE for some reason.