A couple more hours of hacking, and the templates are all new, and more functional then ever. 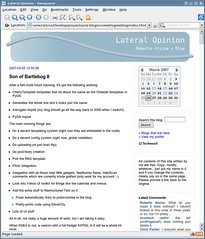 I am making heavy use of Yahoo's UI library, which makes lots of things much simpler:

If the styling was a little more done and a few bugs were ironed, I may even start uploading the site using bartleblog instead of PyDS soon :-)