I wrote this for a contest at the New Scientist magazine. I thought what the heck, maybe someone will like it. And no, I won't explain it, because that spoils the whole thing.

There is no Such Thing as Free Energy

I wished a cold drink was still a possibility, and looked out, across the baked clay that used to be a swamp. The hatch closed and we started our long trip to the stars, cursing the inventor of the perpetual motion engine all the way.

Space Platform by Murray Leinster: rooting for the Death Star

You can read it too, if you want, because it's available, for free, from Manybooks.net in any format you may need.

It's a very old-fashioned (published in 1953) scifi story, but what really shocked me was that in the 25 years between this and Star Wars (1978) everything changed.

Why? Because this is a book written from the perspective of workers building the Death Star.

Specifically, the main character, Joe, is working on building the gyroscopes for a space station which will be the first permanent artificial object in orbit... and is fully loaded with nukes.

Further, it's strictly a USA project (although there is a mention of it "being offered" to the UN) and the whole book is spent showing the courageous workers and soldiers fighting saboteurs in Arizona.

Replace USA by "the empire", workers and soldiers by storm troopers, space platform by death star, communists and anarchists by ewoks and rebels and... well, it's "Return of the Jedi", except the empire wins and all ewoks are killed in the end.

This short novel is completely acritical: US having the power to destroy any city in the world at will is good. All other countries being unable to retaliate is good. Trying to prevent it by any means? Bad and cowardly.

In just 25 years, though, films describing the situation exactly from the opposite point of view had every kid cheering for the saboteurs.

It's amazing that this book is closer in time to Star Wars than Star Wars is to today.

Because it worked once, let's do it again. I have just set a completely arbitrary, and probably too early date for the release of the first english Issue of "PET: Python Entre Todos" magazine.

It will have the same contents as the first spanish Issue and... it will be the last Issue done like this.

From now on, both versions will be published at the same time, if we can.

So, there will be a very short gap between the english first Issue and the second one (less than a month, we hope).

Some people have no sense of scale

I am writing a book about python (in spanish), and it says this:

The arguments about how to write a technical book in spanish are eternal. That in Spain everything is translated. That in Argentina it isn't. That saying "cadena de caracteres" instead of string is bad for the environment.

Fortunately in this book we follow a better method that I hope other books adopt: it's writte like I write. Not even a little bit different. I don't think it even qualifies as spanish, maybe it's written in argentinian. If the readers of our former motherland are bothered by the style... they can translate it.

So today I got this message (sender anonymized because I don't do that):

I was reading your tutorial until I got to the paragraph where you complain or seem to be bothered that in Spain we translate everything and in Argentina nothing. Well, as a reader from the former motherland tell you [sic] that we like writing in our language and that not only am I not going to bother translating from argentinian to spanish, but that I am not even going to read your horrible argentinglish. One favor, learn english well and stop mistreating the old spanish language. You know: an argentinian is an italian that speaks spanish (or so they say) and thinks he is english!. Find yourself a psychoterapist of those you seem to have so much and see if you can overcome your inferiority complex and stop hating so much.

I answered in adequately insulting tone, just wanted to share the fact that there are people actively bothered by people not writing a book the way they like to the point of insulting a whole country. Fun!

I am posting very little because I am writing a lot.

I am just not writing here. I am writing a book instead.

What book am I writing? A book about python programming, of course! It's called "Python No Muerde" (Python Doesn't Bite) and it's in spanish.

So, I am giving this write-long-stuff thing a try.

Of course since I am an open source nerd, I can't do things the usual way, therefore, the book is under Creative Commons. And because I am a programmer, I hacked together a (if I may say so myself) decent structure to handle book-writing.

Of course it's more complicated than that, the PDFs are in the site, the site is uploaded via rsync, the uploads and rebuilds are triggered by hg push, and so on.

In any case, I may post a few times about how this whole thing works, here is the output of the machinery:

Version 0.6 of Marave, my peaceful, fullscreen text editor is now available at the usual place: http://marave.googlecode.com 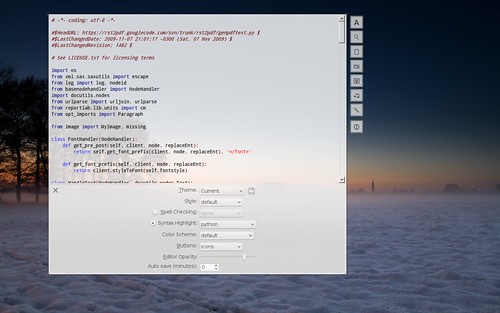