In this article I will not pretend to be stupid, mimicing those "my first week with Linux" pieces. If I write something about XP surprises me, it will be real, and if I seem stupid, that will be real, too.

While I am nerdier than most computer users, I am also unusual in that I have never used regularly any Windows in the last twelve years.

Yes, I switched to Linux from Windows. From Windows 3.11 for workgroups, in 1995, because getting TCP/IP working on Linux was easier.

I am not the guy Windows is aimed for. I am not like the average computer user. I am about a bazillion sigmas off the average windows user.

I skipped the whole Windows 95, 98, Millenium and XP. I have never even touched Windows Vista.

I have used those Windows versions (except Vista), when borrowing a computer or on a cybercafe, but I have never installed any of them. I have helped Rosario with her XP box, but I have had no use for it myself.

Until a couple of days ago I checked the bottom of mynotebook, and there it was... a XP Home license key. And what the hell, since to the best of my knowledge that license is valid and mine, why should I waste it? So I decided to get XP into a virtual machine using VirtualBox OSE.

I know I am installing ancient software but:

I have some experience installing operating systems (mostly Linux) so I think I know what I talk about here:

The XP installer is ok-to-suckish. 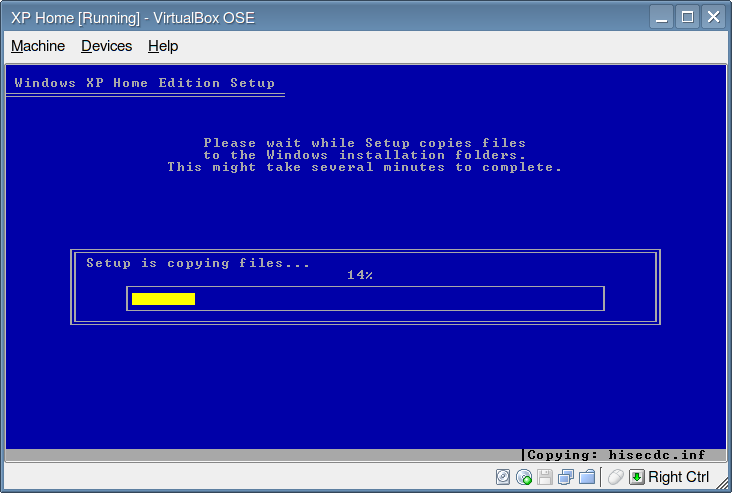 It's not complicated but it has a serious design flaw: you have to be there. Here's the timeline:

Since the questions are spread all over the installation, you basically have to sit through it. I suppose it's so you can see those weird ads for something you already bought like "If you want to use the internet it has never been easier to get started". 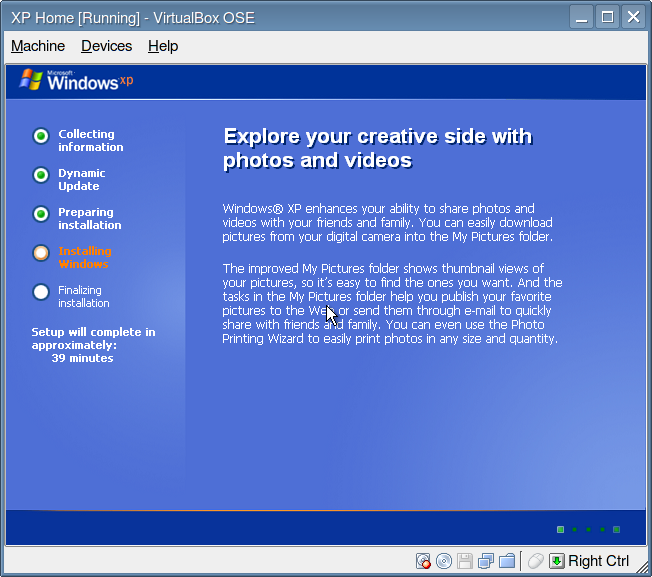 I prefer the modern Linux way of "all questions up front, then go away until I pop the CD", but that's just me.

There are also problems like it assuming ownership of the MBR, but that's to be expected from the big dog in the area, the smaller dogs are the ones that make allowances like not making other OSs unbootable.

So, it's a simple installer, but it has some issues. Whatever, installers are not that interesting and everything can be worked around if you try hard enough (at least I expect I can).

You can login with any of the users created on installation without a password. That's ok, I suppose, as long as I can later change it. TODO: look for it.

I get a warning about security updates, and a red icon complaining, apparently about my lack of antivirus.

So, go fetch the security updates, and it seems to be working ok, but I will rather wait until it ends before actually using it.

Since this is working, I am guessing I am administrator on this box. Is everyone else, too? That's not too cool, but I suppose it's a linuxism I'm having. 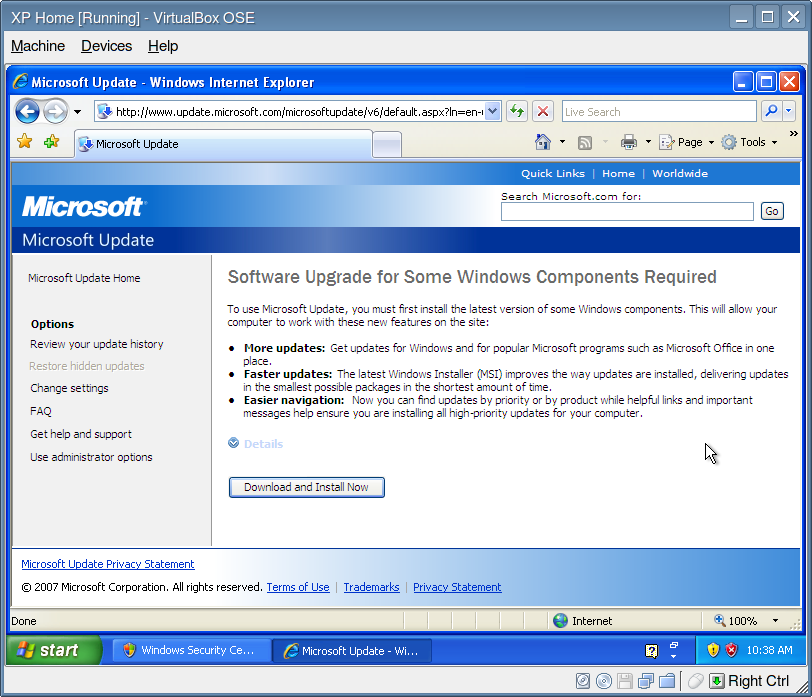 A restart because of the updates? Mmmmkey.

Strange: The reboot is failing. Apparently Explorer.exe refuses to die. After a few "End it now"s it does end.

Ten minutes later, with no reboot, I reset the virtual box. I got into some serious instability here requiring multiple reboots, "Safe Mode" and "System Restore" usage. I'll assign that to VirtualBox, not to blame XP without proof.

Service restore is OK, it does something akin to restoring a backup, except you have no idea what it's restoring or why. But what the heck, it seems useful if your system borks like mine did.

And of course... an unattended reboot. This seems to happen more often in this side of the fence.

Now I am waiting to see if I can finally start a regular session that works. I am in stitches here.

Ok, it works, but there are 11 updates. I think I had installed those, maybe service restore removed them? Let's try again.

On the other hand, I am starting to understand why people don't like Linux, if it feels as misterious as this for them.

One does something that seems reasonable, then something happens and then you do whatever seems ok, and what will happen? No freaking clue.

Maybe I like Linux because I have a pathological need to be told what's happening. Linux tells you a lot. And there's a lot more on the logs. Windows? Well, in windows things seem to just happen. It crashes. It's fixed. What happened? I don't even know where to look.

Hey, for the first time it reboots and starts normally and updated! Let's use this thing!

I know I will have some performance issues because my computer is not exactly powerful, and this is a virtual box so it will be slower still, so I will not say a word about that.

This was veery simplle, even if it requires Yet Another Reboot. In fact, it was simpler than on Linux, which is simplish already.

Seems to work ok, too. Auto resizing the guest display is neat.

Easy to configure, even if the wording in the dialog is strange. Like, guys, there is no HTTP incoming mail protocol, what's that supposed to do? Use a hotmail account and scrape it? 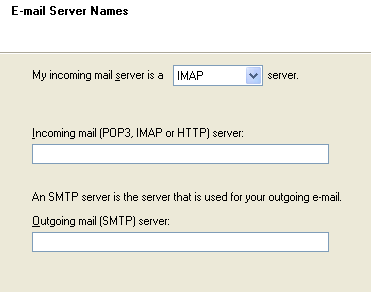 Seems to be downloading all the mail from the IMAP server. That's really not a good idea since there are several dozen thousand messages in there...

Ok, it downloaded all the messages from the Inbox and none on the other folders.

Not so terrible... except it doesn't seem to want to show me any mail in any other folder. The problem is that all folders are set to "Don't synchronize".

Why on earth would I want not to be able to read my mail by default??? Why not fetch headers on background, or at least on opening the folder?

It seems I need to go to each folder and right-click->Synchronization Settings->Headers Only (or All Messages) to make it behave like a reasonable mail client. And I can't choose more than one folder to make it faster.

Dear outlook express.... I have over 200 folders weeps.

All things considered: the included mail client is pathetic for IMAP users.

It's probably ok for occasional users or POP3, but for me? It sucks. I suppose I could install something else, Thunderbird or whatever, but Linux comes with much better tools for this task by default.

Right now? I think I will use my webmail :-(

Now, for RSS. I searched on "Windows Live Search" for "best rss aggregator".

The first 9 either work on Linux or are web-based. So, let's try the tenth, to see if it beats akregator, which I prefer to the other 9.

Surprisingly decent, although I can't find how to use it using the keyboard. If there is a key for "next unread news item" it's not in the UI (closest is space, according to the help).

At least it imported my OPML without issues.

Dear readers: what are the real, nice alternatives for these tasks?

I do not expect the installation of the required software to be as easy as in Linux, since it's much more oddball for a windows user. But let's see how hard it is...

I head for the Riverbank site, and... I get a dialog asking me if I want to enable the phishing detection system on IE7.

I will but why is it asking me now? I have been to other pages, and it didn't ask.

Python installs uneventfully. It seems to be working ok from a terminal, as well as IDLE. So, python is really OK on XP.

The PyQt installer installs the Eric4 IDE which is nice, as it's a large application and if it works, you are probably ok with PyQt.

I was expecting it, but it's annoying me quite a bit that every program for Windows wants to install its own way, asks you things, it feels so ... manual.

Eric doesn't start because I lack MSVCP71.DLL. This probably wouldn't have happened with a decent package manager. Googling it, it's not hard to fix. However, the fix involves:

It's a bit scary. I don't ever manually touch system folders on Linux, and there's a good reason for it, which I bet applies on windows, too: You WILL break stuff that way.

I will atribute this to a bug in the PyQt installer, but I am willing to bet these things are not so unusual based on there being full sites dedicated to giving you back your disappearing DLL files.

Also, the "This folder is magic, you should not look at it" warning for each folder is annoying.

The problem is fixed, though, and all seems to work. 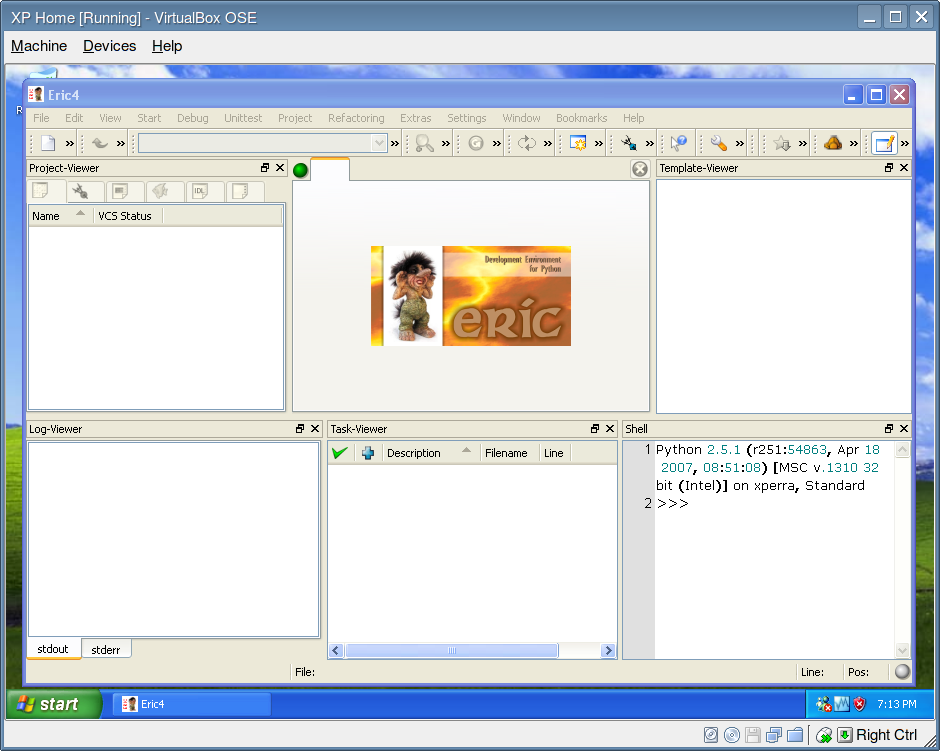 Now, in order to access my source code, I need Subversion. That means... another trip to a website, installing manually another package. This is getting old pretty quickly.

I have been doing this for 45 minutes already. On Linux:

Why doesn't someone create a sofftware repository or windows, andd make it very simple for freeware/shareware/whateverware developers to use? Make it ad-supported with revenue sharing, you are bound to make some money.

However, not to be repetitive: Every time I install a program from now on, assume I whine about how it's simpler on Linux.

I installed TortoiseSVN which is nice enough. Rebooting (sigh).

Now the first thing I must say I really dislike about XP that is not caused by me, the virtual machine, my choice of software, or the phases of the moon: The "Open With" dialog is broken. 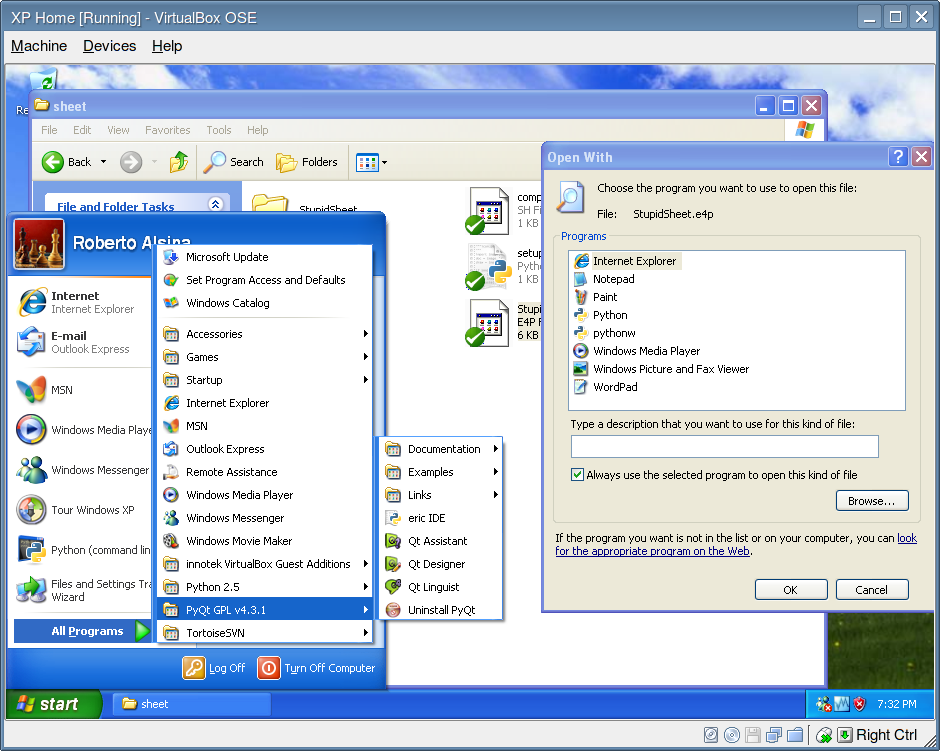 As you can see in the screenshot, it won't let me choose the right app. It's in the start menu (it would be Eric) but it's not on the list of "Programs" and as far as I can see the only way to use it would be finding where in the system the eric4 binary is (I have no idea, and I should not have to know that).

This works way better on KDE and GNOME (and windows 3.11, IIRC).

I manage by doing it backwards (opening from inside Eric4), but it's just wrong.

I had some trouble making Python's easy_install work because it's not on the PATH by default.

I have no idea how to change that on windows, so let's try to fix it.

I would either put it on my ~/.bashrc or add a file in /etc/profile.d. and start another shell.

Whatever, I am not judging this one.

Anyway, I think I have turned this XP install into a reasonable place to develop my hobby PyQt projects. 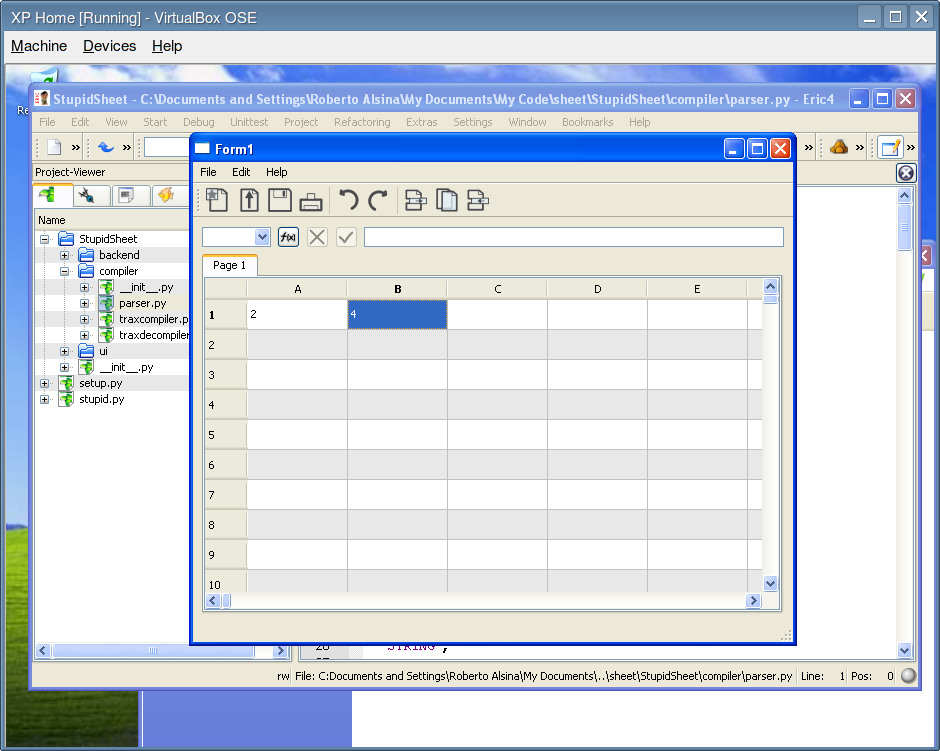 It looks like something called VisualC++ Express Edition is free! let's try that.

Too bad the license says I may not deploy or distribute any program I design or develop using it.

Dear Visual C++ Express Edition: Get the fuck off my HD. I am starting to hate the word "Express". What's this garbage supposed to be useful for?

I am open to suggestions, but it seems the alternative is a GNU toolchain, just like in Linux.

I think I'll stick to Python only on My XP side.

This is as far as I got in one day. We'll see how it evolves (if it evolves) later.

Nothing I hadn't guessed already, yet.

Later on, I will try to work a full day using XP, but not now, becuse I am rather annoyed at it at the moment.