It's my pleasure to announce that I just uploaded rst2pdf 0.14 to the site at http://rst2pdf.googlecode.com.

Rst2pdf is a program and a library to convert restructured text directly into PDF using Reportlab.

It also includes a sphinx extension so you can use it to generate PDFs from documents built with Sphinx.

In case of problems, please report them in the Issue tracker (http://code.google.com/p/rst2pdf/issues/list) or the mailing list (http://groups.google.com/group/rst2pdf-discuss)

This release fixes several bugs and adds some minor features compared to 0.13.2. Here are some of the changes:

Yesterday in the PyAr mailing list a "silly" subject appeared: how would you translate spanish to rosarino?

For those reading in english: think of rosarino as a sort of pig latin, where the tonic vowel X is replaced with XgasX, thus "rosario" -> "rosagasario".

In english this would be impossible, but spanish is a pretty regular language, and a written word has enough information to know how to pronounce it, including the location of the tonic vowel, so this is possible to do.

Here is the thread.

It's looong but, final outcome, since I am a nerd, and a programmerm and programmers program, I wrote it.

What surprised me is that as soon as I started doing it, this throwaway program, completely useless...I did it cleanly.

A year ago I wouldn't have done that. I think I am finishing a stage in my (slow, stumbling) evolution as a programmer, and am coding better than before.

I had a tendency to, since python lets you write fast, write fast and dirty. Or slow and clean. Now I can code fast and clean, or at least cleaner.

BTW: this would be an excellent exercise for "junior" programmers!

I've just uploaded the 0.13 version of rst2pdf, a tool to convert reStructured text to PDF using Reportlab to http://rst2pdf.googlecode.com

rst2pdf supports the full reSt syntax, works as a sphinx extension, and has many extras like limited support for TeX-less math, SVG images, embedding fragments from PDF documents, True Type font embedding, and much more.

This is a major version, and has lots of improvements over 0.12.3, including but not limited to:

Finding a programmer that can program.

If you haven't read Jeff Atwood's Why Can't Programmers.. Program? go ahead, then come back.

Now, are you scared enough? Don't be, the problem there is with the hiring process.

Yes, there are lots of people who show up for programming positions and can't program. That's not unusual!

It's related to something I read by Joel Spolsky (amazingly, Jeff Atwood's partner in stackoverflow.com).

Suppose you are a company that tries to hire in the top 1% of programmers, and have an open position.

Then the company next door needs to do the same thing. They may get 100 applicant. 99 can't program ... and probably 80 of them are the same the previous company rejected before!

So no, hiring the best 1 out of 100 is not a way to get a programmer in the top 1% at all, that's just statistics intuition getting the worse of you.

So, judging programmers by the standard of the applicants you get is like judging quality of a restaurant by licking its dumpster.

But now, having taken care of this, how do you find a programmer that can actually program?

Easy! Find one that has programs he can show you!

I would never hire a programmer that can't show me code. There must be something wrong with him, because programmers write programs.

That's just what we do. If we didn't what kind of programmers would we be?

Let's see some obvious objections to my argument:

But having him show you code is not enough, of course. It also has to be good code, if you are serious about hiring excellent programmers.

So here's some bonus criteria:

Then there's the obvious stuff, references from previous employers, interviews, exercises, an such. But those are the least important filters, the most important thing is that he must be able to code. And showing you his code is the way to do it.

Hacked on kuatia for a couple of hours...

As mentioned previously, I am hacking a bit on a proof-of-concept word processor. Right now, it's hosted on googlecode and called kuatia.

Now, it is far from being useful for anything, but... it can do nested itemized and bulleted lists.

Here's a screenie of the editor and the PDF output it produces via reStructured Text:

Personally I think that's not too bad.

I just uploaded version 0.7 of Marave, my fullscreen text editor to http://marave.googlecode.com

Marave is a "relaxing" text editor inspired by ommwriter, DarkRoom and many others. It combines a spartan fullscreen UI with a vanishing UI, which gets out of the way of your text. 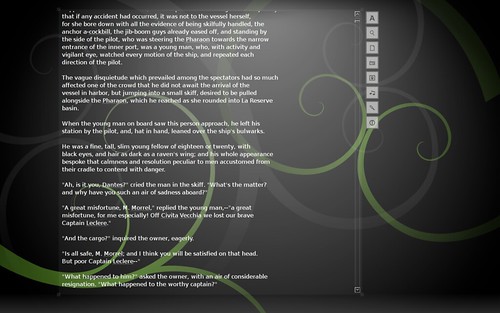 There are no major new features in 0.7, but there are important internal changes and some major bugs fixed:

A teaser for an idea

I have been thinking on what I really really want in a word processor. And then what would it take to create such a thing.

A few minutes of playing have led me the way of this teaser (video here if you can't see it):

Could something come out of it? Who knows.

So, I refactored the stuff that I think a text editor must provide into a nice library, so the next time someone must invent a wheel, he can use Marave's neat spokes and axles:

So, introducing Editor, the most-obviously named class ever! It's a text editing widget for PyQt with extra features, which you can use as a drop-in replacement for a QTextEdit or QPlainTextEdit.

Right now, it lives inside Marave's SVN but it may even move out someday.

Here are its features:

Hopefully this will be helpful for someone else :-)

The nice fellows at Packt Publishing have sent me a copy of Grok 1.0 Web Development by Carlos de la Guardia to review.

I am reading it and expect to write about it in a few days (BTW: nice so far! My proposed slogan: it's like zope, without the Java [1]), and here is a sample chapter so you can see what it's about. It's easy to read standalone, too:

Having had to deal this week with the brokenness that's Django oldforms (legacy site, don't even ask), the Grok way of dealing with forms is refreshing ;-)

Are we really this clueless about software costs? 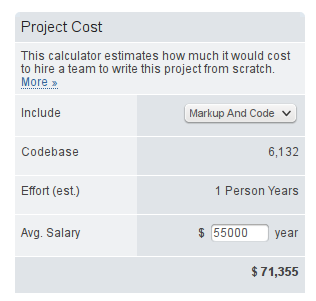 Really, Marave is maybe a month of part-time programming. How could that possible be U$S71355, or "1 Person Years"?

Is this garbage the best we have to estimate costs? If that's the case, then whenever you see something about "Open source program X would take Y years and cost Z dollars to write", cut it down by a factor of 10 or more.

Ok, here's what it would have costed if I had charged for it:

OTOH, for that much freelance work I would not charge you the full rate, I would probably end charging you more like U$S20/hour which would make Ohloh's guess over 3000% too high.

In conclusion: if you like my code (and hey, you can see it for yourself), hire me, I am incredibly cheap, or amazingly fast!